In this series of articles, we would like to introduce you to the most important business travel destinations in Latin America. We will provide you with the most important facts about the cities, as well as information about their history and current economic importance. 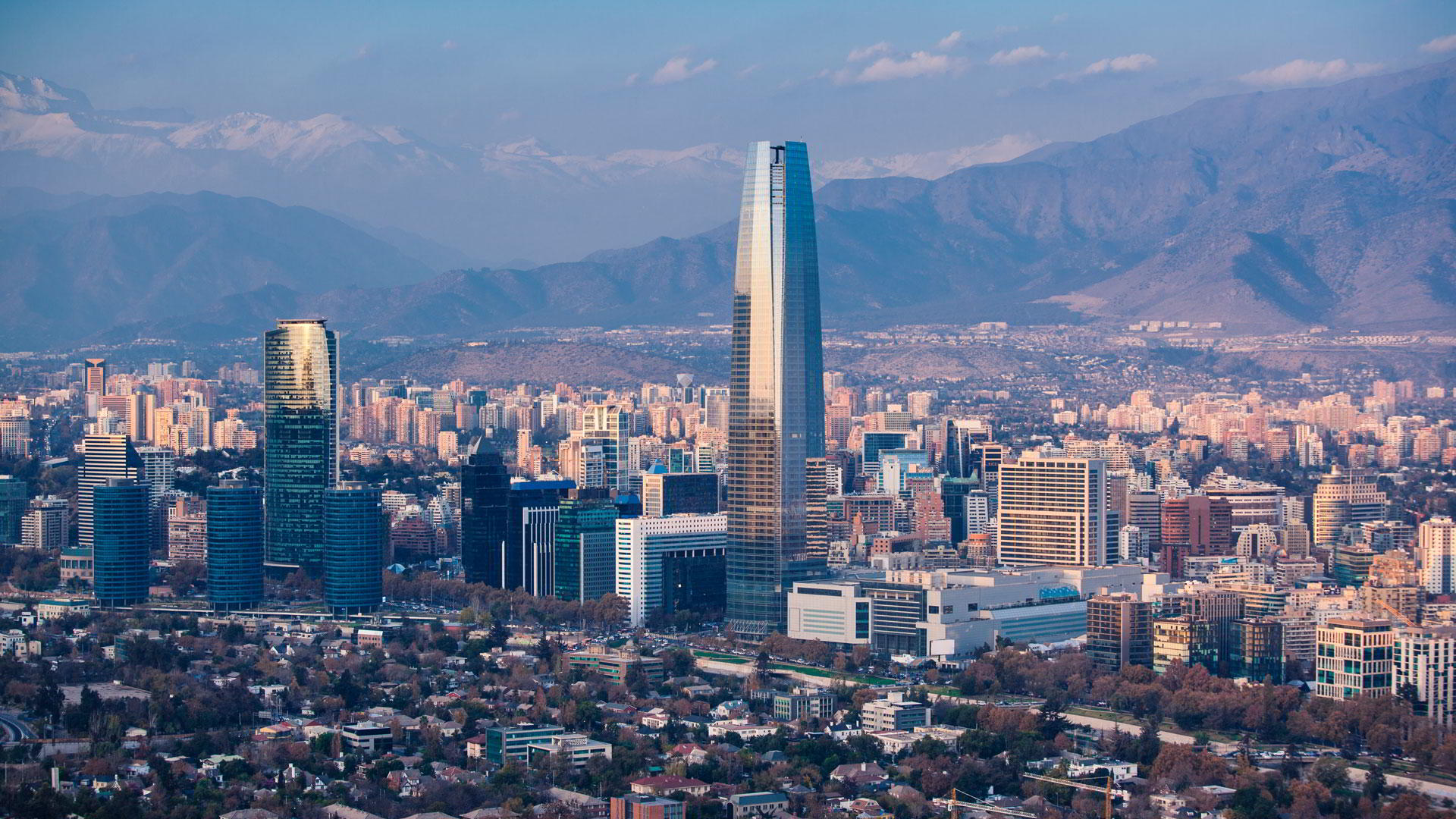 Santiago is located in a basin on the Río Mapocho. This basin forms the northern end of the great Chilean longitudinal valley, which runs meridionally between the coastal cordillera to the west and the Andes to the east and dips into the sea further south, at Puerto Montt, forming the sea lanes between the mainland and the offshore islands (Chiloé, Chonos archipelago, among others). The city is bounded on the north by the Aconcagua Valley, on the south by the Rancagua Basin, and laterally by the Andean and Coastal Cordillera. The Río Mapocho rises northeast of Santiago in the Andes. After about 50 kilometers, the river flows through Chile’s capital. Within Santiago, the water quality decreases sharply. Via Peñaflor the river flows to El Monte, where it then joins the Río Maipo. A large number of canals emanate from the river, the most famous being the Maipo Canal and the San Carlos Canal.

Santiago was founded on February 12, 1541, by Pedro de Valdivia under the name “Santiago del Nuevo Extremo”. The name was meant to recall the Spanish pilgrimage city of Santiago de Compostela. In the same act, the surrounding area was elevated to the province of “Nueva Extremadura”. The ceremony took place on the hill Cerro Santa Lucía, which is now a park on the outskirts of the historic center. Valdivia chose the site because the Río Mapocho formed a larger island here. This location was favorable to defend the city against Mapuche attacks.

The layout of the new city consisted of rectilinear streets 12 varas (14.35 m) wide, evenly spaced 138 varas (165.08 m) apart or at right angles. With nine streets in the east-west direction and 15 in the north-south direction, 126 blocks were formed, called “manzanas” or, when cut square, “cuadras”. One cuadra was designated as the Plaza Mayor and the rest were divided among the conquistadors.

Chile’s most important companies are based in Santiago, as are many branches of foreign companies. According to a 2020 study, Santiago generated a gross domestic product of 195.44 billion U.S. dollars in purchasing power parity. In the ranking of the economically strongest metropolitan regions worldwide, it thus occupied 71st place. GDP per capita is US$26,929 (KKB). GDP per capita grew by an average of 3.7% annually from 2000 to 2020. A total of 3.3 million people were employed here. The city is the undisputed political and economic center of Chile and nearly 40% of the entire country’s economic output is generated here. The largest stock exchange in the country (Bolsa de Comercio de Santiago) is based in the city. Some international institutions, such as ECLAC (Economic Commission for Latin America and the Caribbean), have their offices here.

Opened in 1975, the Metro de Santiago is the third oldest metro network in South America (after Buenos Aires and Sao Paulo) and serves large parts of the capital region. It has five lines with a length of 83 kilometers and 85 metro stations. The metro connects the different neighborhoods of Santiago. There are also micro-buses, cabs, and shared cabs that operate on fixed routes, but also without a fixed schedule.

In 2007, the Transantiago, an integrated public transport system consisting of bus and metro lines, was opened. The completely redesigned network is divided into two subnetworks: a mainline network within the city, which includes bus lines and the existing metro lines, and a system of local and feeder lines. There is an integrated fare structure for both subnetworks. Payment is made with an electronic chip card. Bus operations were put out to tender to ten private companies. The new companies took over the operation in October 2005. More than 1600 new low-floor buses were put into service at the end of 2005 and the beginning of 2006. The new route structure has been in operation since February 10, 2007, along with the integrated fare system. More than 5000 buses and four subway lines are part of Transantiago.

The main Alameda (actually: Avenida Libertador General Bernardo O’Higgins) runs in ten lanes along the edge of the old city from southwest to northeast toward the Providencia administrative and business district. Major inner-city highways include Autopista Central (north-south), Autopista Costanera Norte (east-west), Autopista Vespucio Norte Express (northeast-northwest), and Autopista Vespucio Sur (southeast-southwest). The use of the highways is mostly subject to tolls. The toll varies according to the type of vehicle and the length of the route.

Royal American Limousines is your partner in the provision of ground transportation in Santiago de Chile, Chile. A skilled and knowledgeable chauffeur will await your arrival in a vehicle that fulfills your requirement; Business Sedan, SUV, Minivan, or Executive Van as well as VIP Luxury vehicles and Executive Protection Service. When traveling to a conference with additional associates, Royal American can accommodate your request with a Minibus or Motorcoach, Bi-lingual Drivers, Guides, and on-site coordinators.